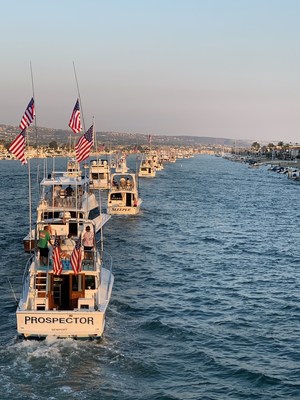 WHAT: War Heroes on Water (WHOW) will return this October for its fourth straight year with a competitive sportfishing tournament off the coast of Southern California benefiting combat-wounded veterans.

The event kicks off publicly with an inspiring, patriotic and visually stunning community boat parade through the Newport Harbor East Turning Basin.

Led by the spectacular tournament flagship Bad Company 144, the parade will also feature more than 35 of the SoCal sportfishing community's top sportfishing yachts. The public is invited and encouraged to share its gratitude for the sacrifices of the men and women of the U.S. armed forces by cheering for the veterans—on land or on water—as they head out to sea with their WHOW teams.

Created by loanDepot Founder and CEO Anthony Hsieh, this year's tournament will take place from October 2-5 and will be the largest to date, tripling the number of participating veterans to 100 and raising more than $1M.

WHOW provides combat-wounded veterans with a unique opportunity to forge new and long-lasting relationships with other vets, as well as fleet captains and crews, through a one-of-a-kind on-water experience designed to help them recover from the physical, emotional and moral wounds of the battlefield. WHOW shines a spotlight on the challenges veterans face when they return home after their tours and raises funds for the tournament's 501c3 partner, Freedom Alliance, which supports the rehabilitation needs of wounded service members and their families.

About War Heroes on Water
War Heroes on Water (WHOW) is an annual sportfishing tournament of unprecedented scale that supports combat-wounded veterans' programs. It was created in 2018 by loanDepot Founder and CEO Anthony Hsieh, who is also the owner and leader of Team Bad Company, a world-class, record-holding competitive sportfishing fleet. Through Hsieh's deep connections with the Southern California sportfishing and business communities, WHOW has grown exponentially over four years and is now the largest non-profit sportfishing tournament in the US.

About Freedom Alliance
Freedom Alliance is a charitable organization which provides help and support to wounded troops and military families. Freedom Alliance has awarded more than $18 million in college scholarships to the children of military heroes killed or disabled in military service and has spent millions more helping injured veterans and military families with outdoor recreational therapy trips, Heroes Vacations, care packages for deployed troops, mortgage-free homes, all-terrain wheelchairs and much more. To learn more, visit www.FreedomAlliance.org or Facebook.com/FreedomAlliance.